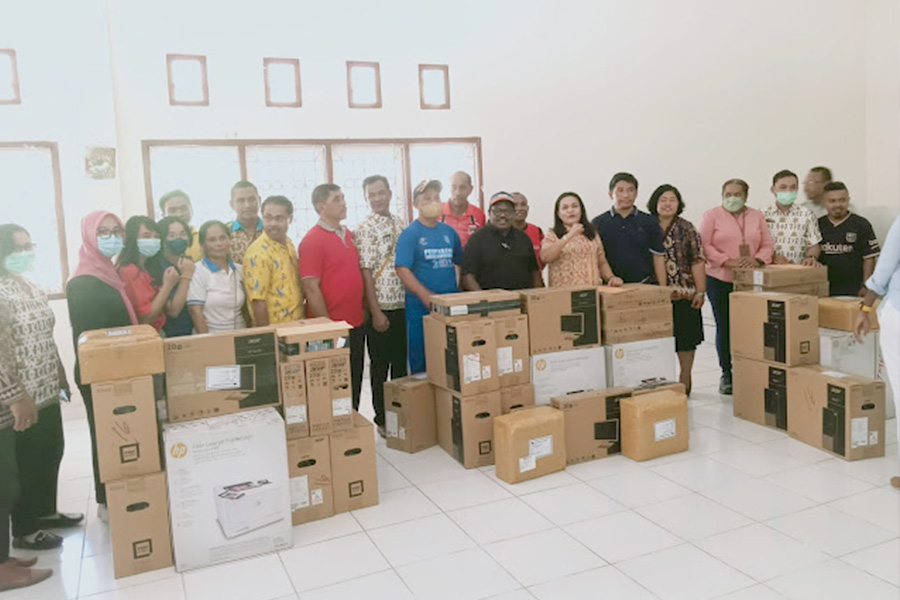 The computer equipment assistance was handed over by PTFI's Vice President of Community Development, Nathan Kum to the Principal of the SD Sentra Pendidikan, Syamsiah Muksin, and witnessed by the Head of the Mimika Regency Education Office, Jeni O Usmany accompanied by the Secretary of the Education Office, Marthen Kana. PTFI's Vice President of Community Development, Nathan Kum in his speech said that the assistance aimed to support the teaching and learning. "This assistance is part of PTFI's commitment to support government programs in the field of education, especially since the majority of students here are from two major ethnic groups, namely the Amungme, Kamoro and five tribes of relatives," Nathan said in his speech.

He hopes that the assistance can help the teaching and learning process at the Education Center so that student’s skills can be developed. PTFI will continue to provide support to the education, health and the community's economy. As a partner of the Government, PTFI supports all programs from the district government. "If coordination and communication are carried out properly, PTFI is very open to the Mimika Regency Government and is ready to help with programs run by the Government," said Nathan.

Meanwhile, the Head of the Mimika Regency Education Office, Jeni Ohestina Usmany, appreciated PTFI for paying attention to the Education Center as well as the world of education in Mimika. Jeni said that the Education Center, which has a majority of Papuan students, was feeling grateful with this assistance. "70 percent of the students here are from the Amungme and Kamoro tribes and 30 percent are from five relative tribes, so the Education Center also needs PTFI attention. We really can't work alone because we take care of a lot and everything depends on the government budget and we feel helped by the existence of this assistance," she concluded.