The ore mill processes ore from the mine by means of the following main concentrator areas: North/South Concentrators, Concentrator #3, and Concentrator #4. Processing design capacity (nameplate capacity) is described in brief (in 000 ton metric tons per day):

Note:
Mill capacity may vary according to ore feed hardness and size, in addition to other economic considerations that may require a lower operating level in order to maximize overall resources value.

Crude and free gold particles do not react well in the flotation process. The Knelson concentrator, a gravity recovery system uses centrifugal force to separate and recover the crude and free gold. Gold recovery from ore is thus enhanced overal. 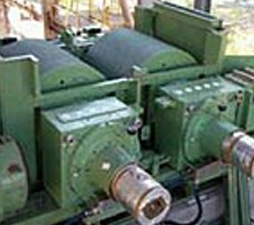 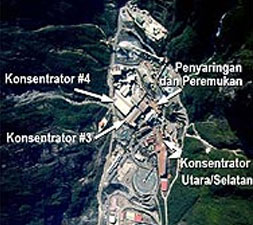 The mill produces copper and gold concentrate from mined ore through a process to separate valuable minerals from the impurities covering them. The main steps in the process are crushing, grinding, flotation, and dewatering. Crushing and grinding transform ore size into fine sand in order to release particles containing copper and gold.

Flotation is a separation process to produce copper-gold concentrate. Concentrate slurry consisting of finely ground ore and water mixed with reagents is introduced into a series of mixing tanks called flotation cells, where air is pumped into the slurry.

The reagents used are lime, frothers and collectors. Frothers form stable bubbles that float to the surface of the flotation cell as froth. Collectors react with valuable metal sulfide mineral particle surfaces. rendering these surfaces hydrophobic. The hydrophobic sulfide mineral particles adhere to the air bubbles rising from the slurry zone into the froth floating on the surface of the cell. The froth containing valuable minerals, resembling metallic detergent froth spills over the top of the flotation machine into launders where valuable minerals collect. The valuable minerals collected in the launders are called concentrate. Concentrate (in the form of slurry containing 65% solids by weight) is pumped to Portsite through four 115 km-long slurry pipelines. Upon reaching Portsite, the concentrate is dewatered until only 9% moisture content remains, and is then shipped for sale.

Gangue collects at the bottom of the flotation cell and ultimately ends up as waste known as tailings. Tailings are channeled to a natural disposal system flowing from the Mill to the Modified Ajkwa Deposition Area (ModADA).