Mimika - The Amungme and Komoro People’s Development Institute (LPMAK) , a partnership institution backed by Freeport Indonesia, has five boarding schools for Papuan children, boys and girls. Up until the end of 2016,  the total number of students living in those five boarding schools reached 756.

These schools are aimed at providing accommodation and enrichment programs for school-age children in isolated areas and in preparing a seeding centre for future intellectuals and public leaders.

The Solus Populi Boarding school in Timika and the Bintang kejora (boys and girls) Boarding School in Kaokanao are managed  by the Timika Diocese while the Amor (Amungme and Kamoro) Boarding School is managed by the Binterbusih Foundation in Semarang.

“The boarding schools managed by the Timika Diocese are focused on guidance and education for Kamoro students. The selections are conducted by the management with the assistance of the pastors at the local parish,” Father Gunawan from the Timika Diocese said on Friday (5/5).

The selections are conducted by the teachers, the patrons and also by health personnel. The Boarding School prioritise Amungme and Kamoro students  who are deemed to have potentials and who come from poor families.

Mitra Citracendekia Abadi Foundation founder, Lucky Tanubrata, said that the main challenge faced by the programs of the Boarding School is the understanding of the parents of the functions and roles of boarding schools. “Parents tends to see boarding schools as mere care centres for their children,” he said.

Therefore, it was really important to educate and involve the parents in providing guidance and educations for the children, he said., This, he added, could take the form of formal and informal meetings.

“In those meetings, various matters are presented, such as reports on the children’s development/progress, the provision of educational information, sharing views and knowledge, and up to the handling of children with special needs,: he said.

The priest who has been active in the education sector since 1989, has decided to totally dedicate himself to providing guidance for Amungme and Kamoro children in Timika. “It is very important to educated children and this should start from and early age. The success rate will be high,“ he said. 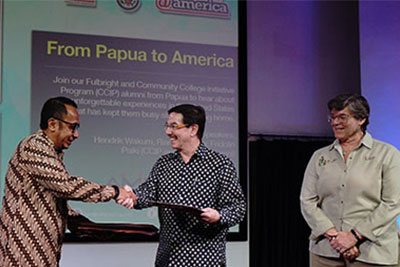 In association with the American Indonesian Exchange Foundation (Amine...